I used to worry about an atom bomb ruining everything. I honestly believed 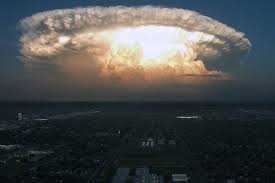 that “The Russians” would some day figure out how to obliterate us, and we them, and everything we knew would end. In school we would hold end of the world drills, where we would crawl under our desks, put our heads between our knees and wait for the ceiling to collapse.

Then we had lunch, and even better, recess.

I grew older, and wiser, and as my awareness of world events grew I knew without a doubt that my life would end in a rice paddy in Cambodia. How could I think otherwise? Every night the Nightly News would report from Viet Nam, and give the day’s body count. American soldiers were dying by the thousands, and there was no doubt in my twelve year old mind that I would be an American soldier. I just hoped that I died well, preferable flat on my back, full of bullets with a smoking, empty gun in my hands.

Eventually I came to the understanding that I would, in all likelihood survive the world’s madness. It was then that I created my own. I’m not really sure if the culture of the seventies propelled my drug and alcohol use into the stratosphere, or if my fatalistic world view developed by the events of the sixties did it, but something in my adolescent brain clicked on – or off, and into the world of escape went I. It was a full fledged assault on my life, and there was nothing I wouldn’t try. Hallucinogens, opiates, beer, uppers, downers and all a rounders, it didn’t really matter as long as what I put into my body allowed me the escape from myself that I craved.

Turns out, there was no escape. I’m stuck with me. Some days it’s hard to get out of bed. Others I can’t stay in it. I’ve been searching for the middle ground for fifty-three years now, and am no closer to finding it now than I was when I crawled under my desk in kindergarten. All I crave is peace and serenity, but that inner peace, when found is fleeting. Try as I might it never lasts more than a few minutes, and then it’s back to the mind’s rat race.

The closest I have come to being at peace with myself is when I am caring for another. My career in the fire service allowed me to become a lifesaver, and in the process save my own. It is said that the things we see, and the ghosts of those we didn’t save drive us to drink, drug, and pull the plug. I don’t see it that way. I was damaged goods long before I put on the uniform. It was the very things I saw, and the ghosts of those that got away that saved me. Without purpose I had nothing. Without the satisfaction of being a difference maker in somebody else’s life I was lost. Without the opportunity to do something great I would have sank lower into myself, and the bottom would have introduced itself before I was able to make sense of  who I feared, who I was, and who I wanted to become.

Life is hard. Living is something that we all know will end, one way or another. Living well is a choice. For me, learning how to do it it well is taking a lifetime. Some days the answers I seek are so close I can feel them, and almost touch them, and know I’m almost there. Most days I’m lost in a world of conflict, trying to stay positive while surrounded with negativity. It is those days that I cling to my sobriety with everything I have, and remind myself just how fragile my perception of reality is.

I’ve run long enough. Now, I stand still, and face my life, the people in it and the events I cannot control without hiding under a desk, or dying in a field, or numbing myself with substances that offer little more than temporary asylum. Now, I understand that I will never understand. And now, that is okay.